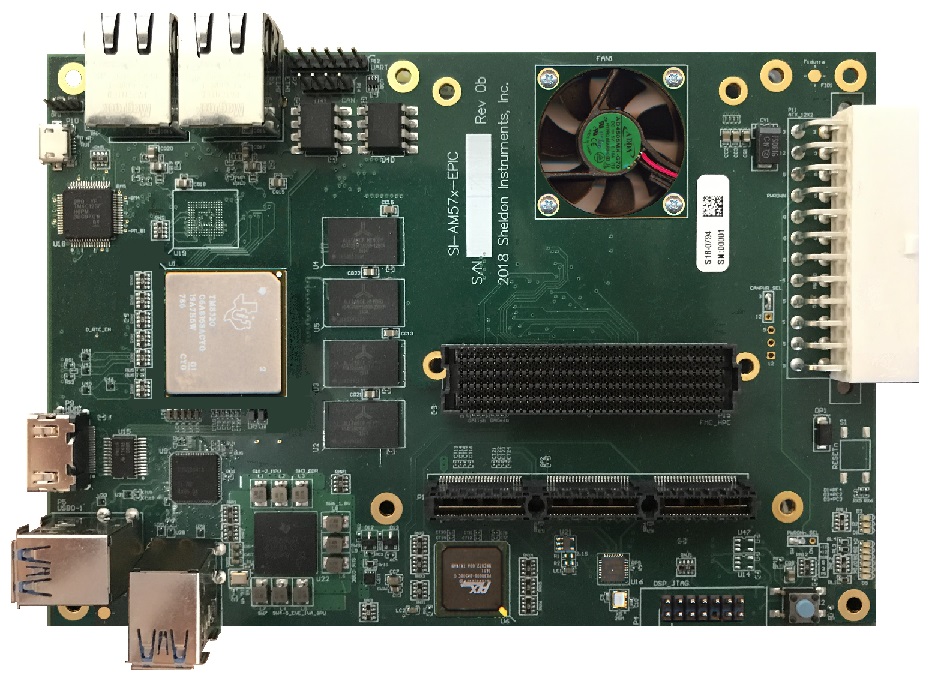 The SI-AM572xDSP from Sheldon Instruments is an ARM plus Digital Signal Processor (DSP) carrier card with PCIe-104 and optional FMC expansion ports that may run Linux and be a C programmable platform intended for low power environments that require intensive computing in a cost sensitive solution.

As an industry first, a novel Programmable Real-Time Unit (PRU) consisting of a pair of Dual Cortex-M4 controllers are available as a powerful C programmable logic engine, similar to an FPGA. The great advantage of the ubiquitous C language significantly reduces the complexities of VHDL or Verilog languages required for programming FPGAs.

All of this is attained at less than 8 watts of power consumption while most processors of this caliber are in the 60W range.

Hardware Expansion with PCIe-104 and PRU to FMC
There are two hardware expansion sites on the SI-AM572xDSP, with the first consisting of a PCIe-104 expansion site capable of stacking up to four (4) single lane PCIe-104 modules.

The second expansion site takes advantage of the Sitara’s novel Programmable Real-Time Unit that can be used as an FPGA substitute, complete with a myriad of multi-function customizable digital I/Os, with access to all internal device resources. The PRU lines are routed to an FPGA Mezzanine Card (FMC) expansion connector.

Flexible PCIe-104 and FMC expansion sites make it ideal for those who prefer to leverage a wide array of 3rd party industry standard modules, use their own custom hardware or simply update legacy designs with minimal effort.

Upgrades & Options
Upgrade options for the SI-AM572xDSP include various core and memory configurations, nonvolatile storage, and either commercial or expanded temperature ranges. A full line of software development tools are available from Sheldon Instruments and TI for Windows and Linux platforms.

The SI-AM572xDSP is available with extensive development tools from Sheldon Instruments and TI’s Code Composer Studio Integrated Development Environment (CCS) that include the Reference Design Kit (RDK) for both the ARM side as well as the DSP side.

Host and ARM Side Tools
For the ARM or host side, Sheldon Instruments provides:

DSP Side Tools
For the DSP side, Sheldon Instruments provides various TI CCS projects, both compiled versions for quick loading with the ARM side sample program, along with complete projects and related source code. These DSP projects include:

Connectors for Ports and Peripheral Expansion